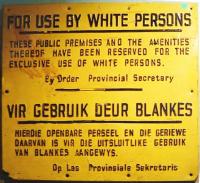 Taught by Dr. Karin Berkman, this course examines South African cultural production between 1948 and 1996, under apartheid rule and in the post-apartheid period. During the course of the semester, the class will read the works of some of South Africa’s most renowned writers, including Alan Paton, Nadine Gordimer, Athol Fugard, Oswald Mtshali, Mongane Wally Serote, Dennis Brutus, Antjie Krog, among others, and analyze diverse literary forms including the novel, the short story, life writing, drama, and poetry. In addition, close attention will be paid to South African film. In order to understand the particular characteristics of South African literature and film, the course will focus on historical background and trace the evolution and effects of South Africa’s exceptional laws of racial discrimination. The class will debate the role of the writer and filmmaker in times of political crisis and examine the ways in which literature and film are profoundly implicated in practices of resistance, witnessing, and commemoration. Finally considered will be how South African writers and filmmakers continue to write and create despite the constant threats of censorship, banning, and exile.