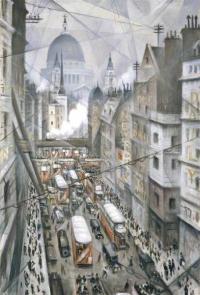 Taught by Dr. Karin Berkman, the course surveys developments in the novel, short story, and poetry across the twentieth century, examining the ways in which British literature responds to cataclysmic historical events. We begin by tracing the ways in which the novel provides a profound critique of the iniquities of British imperialism. We then turn to an examination of the poetry that emerges from the trenches of the First World War, focusing on the work of Wilfred Owen, Isaac Rosenberg, Edward Thomas, and Siegfried Sassoon. We consider too, the retrospective gaze at the Great War in the work of the late-twentieth-century poets, Seamus Heaney, Carol Ann Duffy, Michael Longley, and in the novels of Kazuo Ishiguro. The poetry of Philip Larkin and Ted Hughes which occupies a prominent place in the British canon is placed alongside the work of women writers like Carol Ann Duffy and Alice Oswald who challenge and re-orient Larkin and Hughes’ achievements. We follow the new directions of British literature in post-colonial and post-war Britain, evident in the work of Zadie Smith and Louise Bennett, paying particular attention to issues of class, race, and gender in an increasingly multi-cultural society.